Statement on behalf of Youth NGOs of the Republic of Azerbaijan 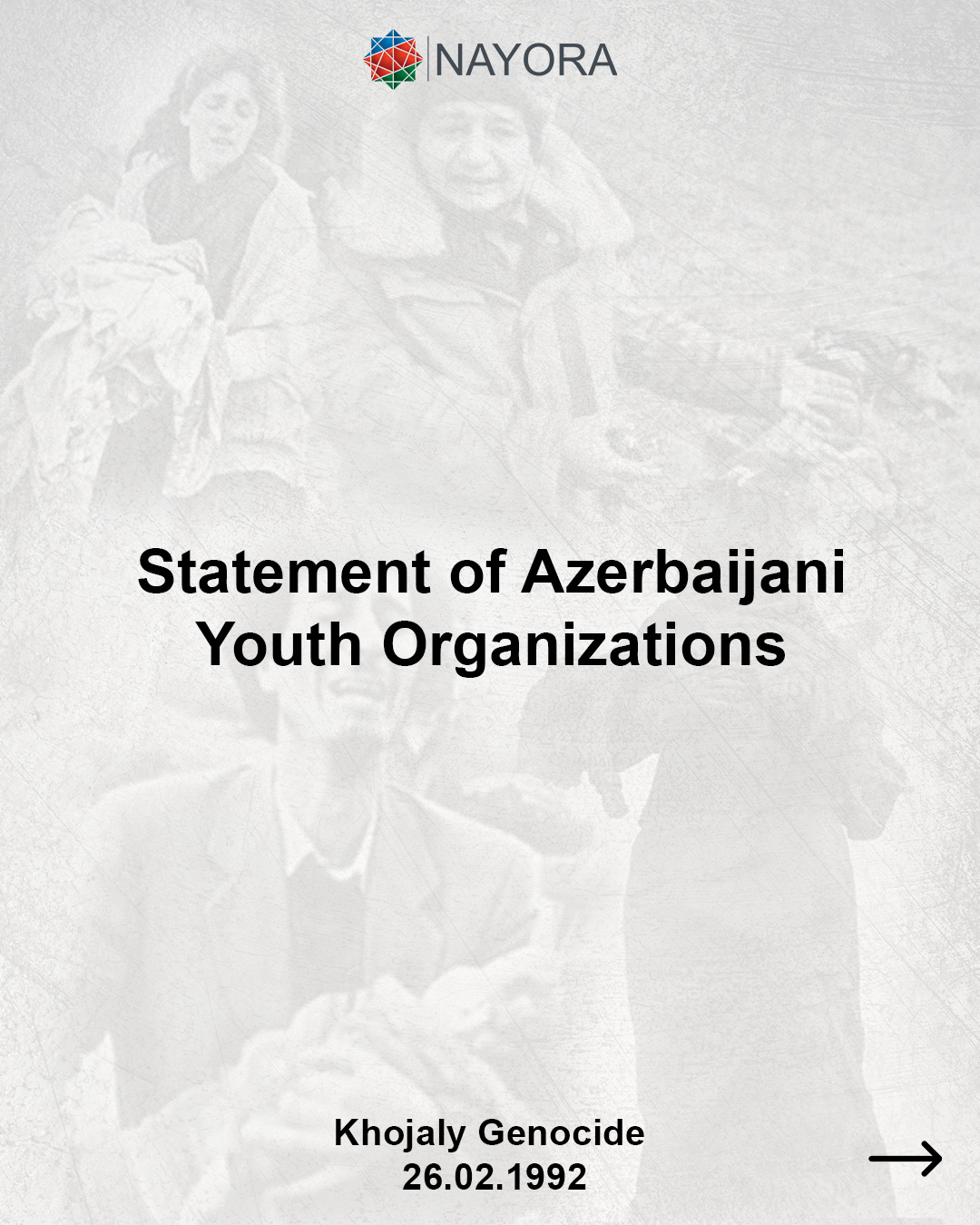 On behalf of Youth NGOs of the Republic of Azerbaijan:

Today marks the 29th anniversary of the Khojaly Genocide - one of the most tragic days in the history of Azerbaijan.

On 26 February 1992, unprecedented atrocities against peaceful Azerbaijanis were committed by Armenian military units in Khojaly, Azerbaijan. After hours of heavy shelling, the city of nearly 3,000 people was besieged and the civilian population was massacred. In a matter of hours, 613 Khojaly residents, including 63 children, 106 women, 70 elderly people, were killed with unimaginable cruelty solely because of their ethnicity; about 500 people, including 76 children were severely injured. On that night, 1,275 survivors were taken hostage and exposed to horrific torture. The fate of 150 prisoners, including 68 women and 26 children, is still unknown.

Commission of grave crimes against civilians during the conflict has been a consistent policy of the Armenian state for decades. It was an integral part of the military aggression by Armenia in the early 1990s and was continued even during 26 years of ceasefire. The same policy of committing crimes against civilians was also observed in the 44-day war, which was war provoked by the Armenian armed forces on 27 September 2020. As a result of the bombing by Armenia of Azerbaijani cities, especially Ganja and Barda, located hundreds of kilometers away from the military operations theatre, 93 civilians were killed and more than 400 were injured.

We, representatives of youth organizations of Azerbaijan uniting tens of thousands of young people, declare the following with regard to the Khojaly Genocide committed by the Armenian armed forces on 26 February 1992:

It is unacceptable that perpetrators of the most serious international crimes, committed at the end of the twentieth century before the eyes of the world community, are considered heroes in modern-day Armenia and live with impunity! Robert Kocharyan, Seyran Ohanyan, Serzh Sargsyan, Zori Balayan, Vitaly Balasanyan and their accomplices, who were the organizers and perpetrators of the brutal massacre of hundreds of civilians in Khojaly, and who repeatedly admitted committing these actions in their interviews and speeches without any remorse, must be held accountable for their crimes!

We call on international organizations as well as parliamentarians of all countries to adopt a resolution on the Khojaly Genocide and strongly condemn this crime against humanity in order to prevent the recurrence of such events in the future!

We demand that the Armenian government officially apologize for the genocide committed in Khojaly and provide a guarantee at the state level that it will not commit such crimes again!

The conflict has already become history - the territorial integrity of Azerbaijan has been secured. Now, it is time to establish peace and security in our region, which has suffered from this conflict for 30 years. However, in order to ensure peace and coexistence of the Armenian and Azerbaijani peoples, justice must be served, and war criminals, including the Khojaly murderers, must be prosecuted. Justice is the cornerstone of peace!

For the sake of establishing lasting peace and security in the region, providing support to the victims of the Khojaly Genocide, and holding perpetrators accountable under international law, we call upon everyone, who adheres to human values and principles of humanism - leaders, public activists, journalists, bloggers or athletes, regardless of their ethnicity, faith, gender and age - to spare no effort for the recognition of the Khojaly Genocide at the international level, and to show solidarity with the victims of this gruesome crime!

Signed by the Youth NGOs of the Republic of Azerbaijan 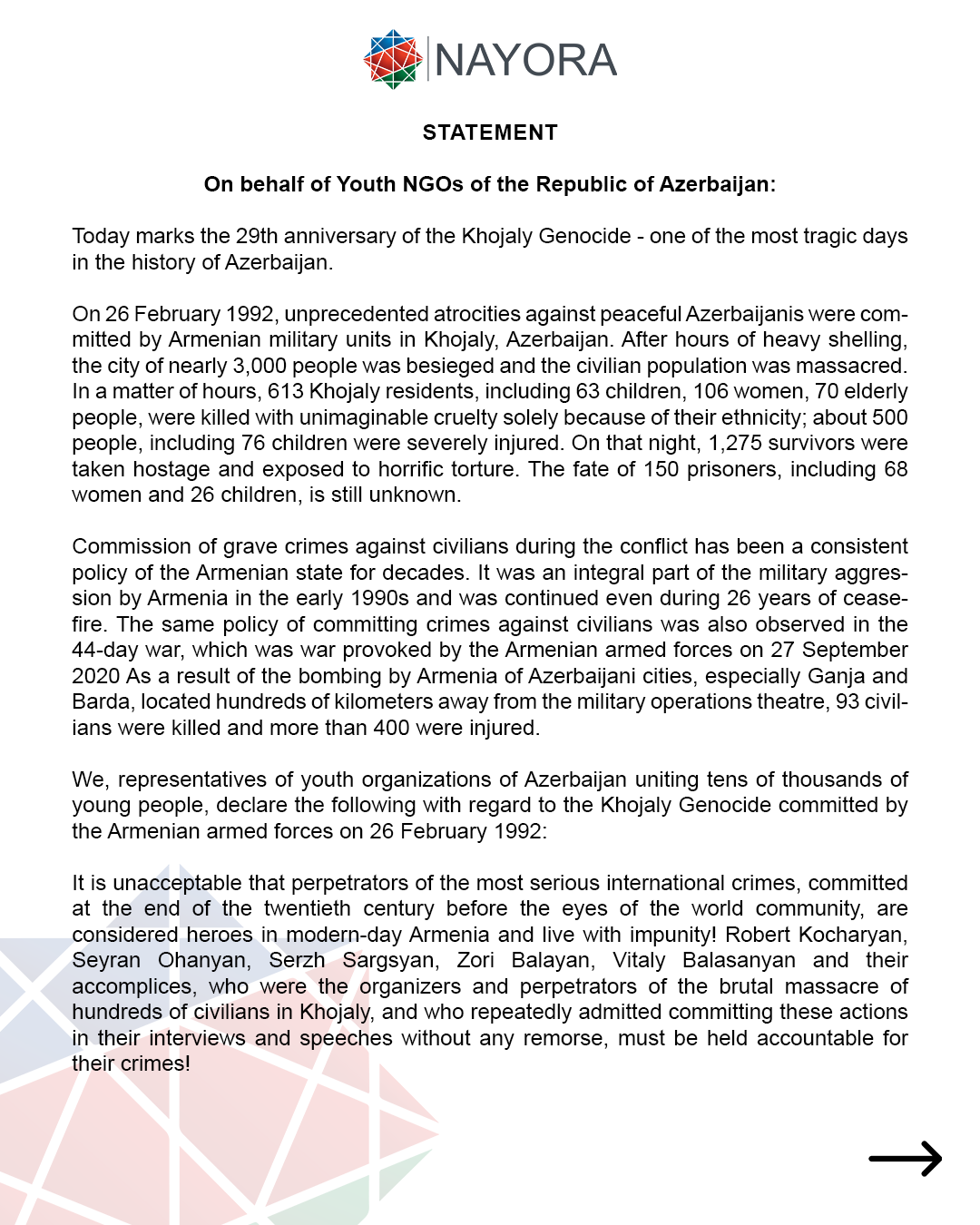 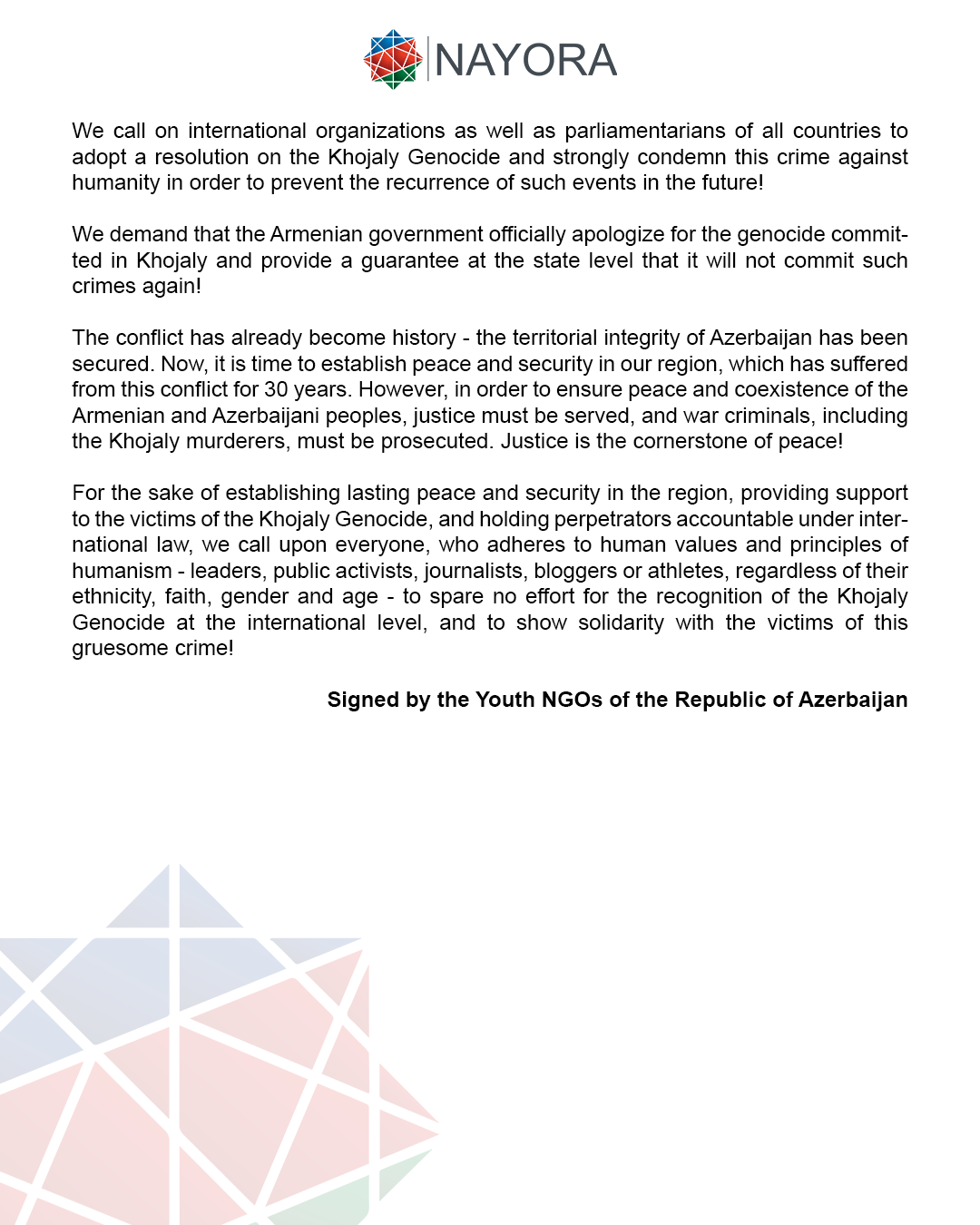